Waiting on Wednesday (24): Ignite Me (Shatter Me #3) by Tahereh Mafi 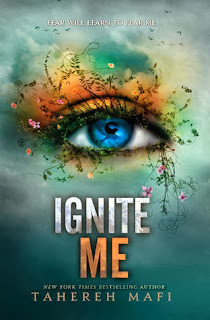 Juliette now knows she may be the only one who can stop the Reestablishment. But to take them down, she'll need the help of the one person she never thought she could trust: Warner. And as they work together, Juliette will discover that everything she thought she knew-about Warner, her abilities, and even Adam-was wrong.

In Shatter Me, Tahereh Mafi created a captivating and original story that combined the best of dystopian and paranormal and was praised by Publishers Weekly as "a gripping read from an author who's not afraid to take risks." The sequel, Unravel Me, blew readers away with heart-racing twists and turns, and New York Times bestselling author Kami Garcia said it was "dangerous, sexy, romantic, and intense." Now this final book brings the series to a shocking and climactic end.

I'm a bit premature with this pick as I have several months of waiting left, but there are no words to describe the excitement I have over this book and at having Warner all to myself  more Warner.  I'm literally counting down the days until February!

Posted by A Belle’s Tales at 2:36 AM
Email ThisBlogThis!Share to TwitterShare to FacebookShare to Pinterest
Labels: memes, Shatter Me, Tahereh Mafi, WoW