Review: The Forest of Hands and Teeth by Carrie Ryan 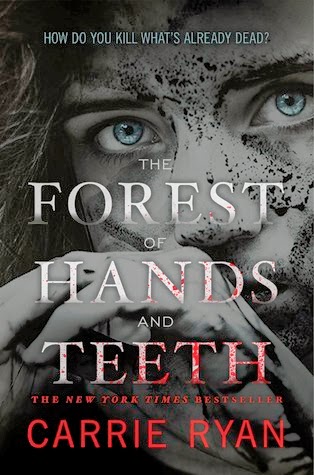 In Mary's world, there are simple truths.

The Guardians will protect and serve.

The Unconsecrated will never relent.

But slowly, Mary's truths are failing her. She's learning things she never wanted to know about the Sisterhood and its secrets, and the Guardians and their power. And, when the fence is breached and her world is thrown into chaos, about the Unconsecrated and their relentlessness.

Now she must choose between her village and her future, between the one she loves and the one who loves her. And she must face the truth about the Forest of Hands and Teeth. Could there be life outside a world surrounded by so much death?

Do you ever begin reading a book that was released a few years ago and become so immersed in it and so impressed by it that you want to shake yourself for not reading it sooner??  That is me in a nutshell with The Forest of Hands and Teeth.   I often throw out the phrase “I devoured this book” for those stories that I read in one sitting, but I think this time it is more appropriate to say that this book devoured me.  I couldn’t put this book down until I knew what was going to happen to Mary.

Mary lives in a village ruled by the Sisterhood.  A village that is surrounded by a fence protected by the Guardians.  One that protects the villagers from the Forest of Hands and Teeth and keeps the unconsecrated out.  But it also keeps Mary in, away from her freedom and away from the thing she dreams of most:  the ocean – something she has only heard about in her mother’s stories.  When the fence is breached and her village is overrun, Mary is given a choice for the first time in her life.  Will she choose love, or will she choose the ocean?

“We’re already dead.  We’re surrounded by it every day.  And we shuffle along in our lives just like they shuffle along in theirs.  It’s inevitable that it invade our lives someday the way it invaded our village this morning.  We aren’t part of any cycle of life…”

This was a perfect time of year for me to read this story.  I’m pretty sure I held my breath more than once, and I never would have believed that I could fear the Sisters as much as the unconsecrated!! Sister Tabitha terrified me:

“‘Good,’ Sister Tabitha says as she slides her hands from my head to a spot under my chin.  Her grip is firm and almost painful.  She tugs at me so that I am looking into her eyes, which are the dark gray green of the sky during a summer thunderstorm.  ‘The next and only time you open your mouth to speak… will be to praise our Lord.’”

This book was so suspenseful, but it was also intriguing and lovely.  I really enjoyed the main character, Mary.  I can certainly see where some might find her selfish at times, but never did I hold that against her.  I found her to be admirable and full of strength.  She wasn’t willing to let love blind her to her goals; and while I doubt I would have made the choices she did, I was certainly fascinated by her decisions.

“He places a hand on my cheek, trails one finger along my jaw, and I’m forced to close my eyes so that he doesn’t read in my expression the words that ring in my head but that I can’t say aloud.  That it is not enough.  That I am terrified he is not enough.”

I like to think that I’m a pretty good judge of book characters.  I usually know right away who I like, who I don’t, and who I ultimately am going to root for – whether it be in the romance department or in the case of survival.  I don’t think I have ever been more indecisive about fictional people in my life.  Carrie Ryan wrote her characters so brilliantly and so complex that just when I thought I had a character figured out and I was at the point of thoroughly disliking them… things were revealed and actions taken, and the character would completely redeem themselves in my eyes!  That has never happened to me before!  To say this kept things interesting is quite the understatement.

I absolutely loved the romance in this story, and I found myself just as torn between Harry and Travis as Mary was.  The two brothers truly love her but for very different reasons.  It was heart-wrenching at times but so beautiful.  And because of the dire situation they were in and the fact that they were brothers, the tedious components that often make up a ‘love triangle’ were noticeably absent and you really felt for every character involved.

“He places his hands over mine, the feeling so warm and familiar. ‘Those days back there, in the house.  That is my world.  That is my truth.  That is my ocean.’”

I’m a huge fan of Katie from The Hallowed series by Laura Bickle and how she clings to her faith even through the hardest of times. In The Forest of Hands and Teeth, Mary completely loses her faith and renounces God.  I found it every bit as remarkable and engrossing to see such a different take on one’s spiritual beliefs when faced with loss and tragedy.

“As with every building in our village there is a line of Scripture there, carved into the wood by the Sisterhood.  It is our habit and duty to press a hand against these words every time we cross a threshold, to remind us of God and His words.  I wait for them to calm me, to infuse me with light and grace.  But it does not come, does not fill the hollow ache inside me.  I wonder if I will ever feel whole again now that I no longer believe in God.”

I definitely shed some tears over things that transpired in this book, and I was unhappy to reach the end.  I want more!  I’ve already read a sneak peek of the next novel in the series, and I’m saddened to realize I may not be getting more.  It seems the next book is from a new character’s perspective.   No matter, though – Carrie Ryan has already won me over with her writing, and I wasted no time in purchasing the rest of the series.   I know The Forest of Hands and Teeth is a book I am going to want to revisit often.


“And I wonder if ever there was a crueler world than this one
that forces us to kill the people we love most.”

Posted by A Belle’s Tales at 1:41 AM
Email ThisBlogThis!Share to TwitterShare to FacebookShare to Pinterest
Labels: Book Reviews, Carrie Ryan, zombies