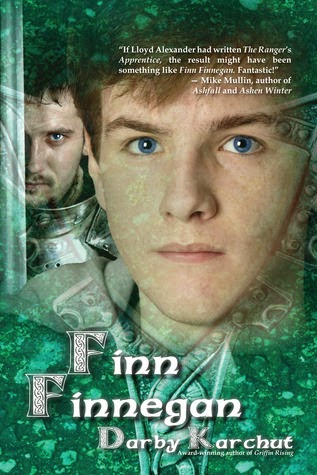 Finnegan MacCullen: a thirteen-year-old apprentice with the famous Irish temperament. Gideon Lir: a legendary Celtic warrior with a bit of a temper of his own.

Secretly, these blue-collar warriors battle the hobgoblins infesting their suburban neighborhood...when they are not battling each other.

Finn (not bleedin' Finnegan) MacCullen is eager to begin his apprenticeship. He soon discovers the ups and downs of hunting monsters in a suburban neighborhood under the demanding tutelage of the Knight, Gideon Lir. Both master and apprentice are descendents of the Tuatha De Danaan, a magical race of warriors from Ireland. Scattered long ago to the four corners of the world, the De Danaan wage a two thousand year old clandestine battle with their ancient enemy, the Amandán, a breed of goblin-like creatures.

Now with the beasts concentrating their attacks on Finn, he and his master must race to locate the lost Spear of the Tuatha De Danaan, the only weapon that can destroy the Amandán, all the while hiding his true identity from his new friends, Rafe and Savannah, twins whose South African roots may hold a key to Finn's survival.

Armed with a bronze dagger, some ancient Celtic magic, and a hair-trigger temper, Finn is about to show his enemies the true meaning of "fighting Irish."

To anyone normal, Finnegan “Finn” MacCullen is a regular Irish thirteen-year-old kid who lives with his legal guardian, Gideon Lir. But that’s not true at all. Sure, Finn lives with Gideon, he’s Irish, and he is, after all, just a thirteen-year-old kid; but what anyone normal doesn’t know is that Finn is an apprentice descended from the Tuatha De Dannan clan, and his “guardian” Gideon is a Celtic warrior. Gideon trains Finn every day to fight goblins and other demons in their world. Things are going relatively smoothly (translation: Finn doesn’t suck too badly at his training) – until Finn makes two friends right across the street: twins Rafe and Savannah Steel. Gideon has told Finn countless times that people like them can’t be associated with mortals, or it could put both them and the mortals in danger. Finn, of course, doesn’t listen; and chaos follows shortly after.

One of the aspects of the story I really enjoyed (although I wish it would have been talked about more) was Finn’s father. I would love to see a prequel in the future from his father’s point-of-view. Hopefully, we’ll get to learn more about him in the next book – which I’m super excited for – Gideon’ Spear, due out February 2014! Here’s the cover:

Another thing I loved was that this book isn’t just about warriors and goblins. In one particular scene, Gideon and Finn are at the bank and run into a friend of Gideon’s. He’s not a Celtic warrior… but an angel. I’m excited to see what other kinds of beings Ms. Karchut will introduce in the sequel!!

The end of Finn Finnegan wasn’t exactly a cliff-hanger, but there were definitely still some loose ends to be tied – I’m especially anxious to see where the storyline with Rafe and Savannah’s dad leads. Mr. Steele has some suspicions about Gideon – especially with the way Gideon’s kind of tough on Finn and doesn’t want him being friends with Rafe and Savannah. When Mr. Steele sees blood on Finn’s face and Gideon’s hands, he immediately notifies a social worker. Although I’m hoping nothing bad happens with that particular scenario, it would definitely be an exciting albeit heartbreaking twist in the story.

~ Finn: It’s always so nice to have a main character I can love. He may have started out as sort of a stubborn, typical teenage boy, but that paved the way for serious character growth in Finn. He became a better fighter, a more obedient apprentice, and – most importantly – a more determined person.

~ Gideon: Gideon reminds me a bit of Hagrid in Harry Potter in that he is always looking out for Finn. It doesn’t hurt that he’s fairly tall and has a beard, either ;) But not only does he have a large stature, he also has a very large heart; and no matter how hard he is on Finn, he cares about him much more than he lets on.

~ Asher: I know Asher is kind of a jerk at first – actually, a lot of a jerk at first – but there was something about him that was intriguing to me. I wanted him and Finn to work out their differences and work together to defeat the goblins. They eventually did just that, but a tragic event put a quick end to their teamwork. All in all, I really like Asher and would like to know more about him.

This book was, in a word, awesome; it made me sob in one part and laugh out loud in others. I would highly recommend it to readers who enjoy adventure, heart, and learning about the lore of other countries. Even though it is middle-grade, I believe readers of all ages can appreciate the gem that is Finn Finnegan.

A HUGE thank-you to Ms. Teresa Mary Rose from Readers Live A Thousand Lives  for lending me this book.  *huge hugs*

Posted by A Belle’s Tales at 11:09 AM
Email ThisBlogThis!Share to TwitterShare to FacebookShare to Pinterest
Labels: Book Reviews, Katertot reviews, MG