Early Review: The Iron Traitor (Call of the Forgotten #2) by Julie Kagawa 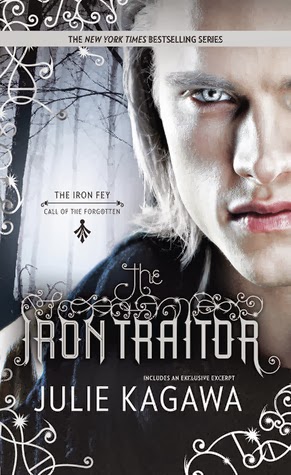 In the real world, when you vanish into thin air for a week, people tend to notice.

After his unexpected journey into the lands of the fey, Ethan Chase just wants to get back to normal. Well, as normal as you can be when you see faeries every day of your life. Suddenly the former loner with the bad reputation has someone to try for; his girlfriend, Kenzie. Never mind that he's forbidden to see her again.

But when your name is Ethan Chase and your sister is one of the most powerful faeries in the Nevernever, normal simply isn't to be. For Ethan's nephew, Keirran, is missing, and may be on the verge of doing something unthinkable in the name of saving his own love. Something that will fracture the human and faery worlds forever, and give rise to the dangerous fey known as the Forgotten. As Ethan's and Keirran's fates entwine and Keirran slips further into darkness, Ethan's next choice may decide the fate of them all.

“It is the smallest things that are often the most important, Ethan Chase.”

I read The Lost Prince last year and loved being plunged back into the magical world of the fey and being reacquainted with old friends.  I really liked Ethan and Kenzie and thought it was a great start to a spin-off series.  The Iron Traitor has all of the magical aspects that make the Fey series so addictive, but I admit I don’t yet have the same connection to Ethan and Keirran that I have to Ash and Puck.  However, this is Ethan’s series and his story; and as the real world began to fade away and I became immersed once again in the Nevernever, I was reminded all over again that it doesn’t matter whose story it is – as long as Julie Kagawa is the one telling it, it’s going to be an enjoyable one.  And no worries, fellow Fey fans – those favorite characters do make their presence known, and I loved every single moment of it!

“The cat sniffed and gave me a look of triumph.
‘I never thought I would see the day
when a human said something sensible.’”

Kagawa and her world building amaze me every single time I read her writing.  There was no putting the book down until I reached the last page.  However, once I reached the last page, I didn’t want to put the book down as much as I wanted to shake it like a Magic 8 ball to see if that would somehow offer up a new conclusion to the aftermath I had just witnessed!  I’ve said before that I don’t normally mind cliffhangers, but either I’m growing tired of them or this was an exceptionally cruel one.  I can’t believe we have to wait a whole year to find out the outcome of what transpired at the end of this book.  Fortunately, there is a bit of a peace offering with the inclusion of a sneak peek at The Forever Song, book 3 in the Blood of Eden series.  It was amazing – Jackal makes me swoon – and the wait until its 2014 release is going to be a long one.

Fans of the Fey series will not want to miss this sequel. It’s definitely going in my collection.

“You can’t save everyone.
Sometimes, you have to make that decision to let them go.”

I received a copy of this book in exchange for my honest review. Quotes are taken from the ARC and are subject to change.

Posted by A Belle’s Tales at 4:54 PM
Email ThisBlogThis!Share to TwitterShare to FacebookShare to Pinterest
Labels: ARCs, Book Reviews, Call of the Forgotten, Julie Kagawa, The Iron Fey Series