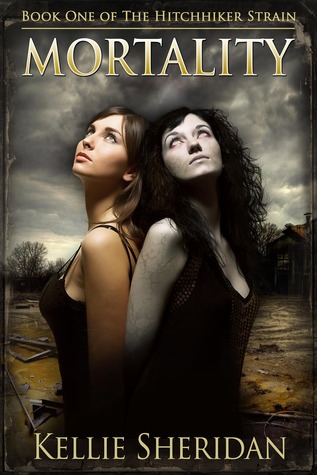 After surviving a deadly plague outbreak, sixteen-year-old Savannah thought she had lived through the very worst of human history. There was no way to know that the miracle vaccine would put everyone at risk for a fate worse than un-death.

Now, two very different kinds of infected walk the Earth, intent on nothing but feeding and destroying what little remains of civilization. When the inoculated are bitten, infection means watching on in silent horror as self-control disappears and the idea of feasting on loved ones becomes increasingly hard to ignore.

Starving and forced to live inside of the abandoned high school, all Savannah wants is the chance to fight back. When a strange boy arrives with a plan to set everything right, she gets her chance. Meeting Cole changes everything. Mere survival will never be enough. (From Goodreads)

I’ve been in the throes of major Walking Dead withdrawal, so I was ecstatic to receive Mortality for review. This book was exactly what I needed!  The story is exciting, the plot is riveting, and the characters are amazing.  While I initially was enjoying the story because it felt reminiscent to one of my favorite reads, Kellie Sheridan took her story to a new and unique level, making me quickly drop any comparisons I had in the beginning. She writes a POV from a particular character that blew me away!  Ever since my Buffy the Vampire Slayer days, I’ve been enthralled with female lead characters who are worthy of the label ‘badass.’  I don’t hand out that title generously, so believe me when I say that Savannah easily earns it.  She had me at ‘picking up my crossbow.’  She’s not only tough, but she asserts herself as a leader; and, while some results weren’t always favorable, I admired her tenacity and her willingness to right any wrongs she felt she may have made.   Savannah’s story is fascinating, but there is a parallel story being told from Zarah’s POV that is nothing short of brilliant.  I love both of these strong female characters.

It is a rare treat when a zombie novel can not only thrill me but also get me emotionally invested.  I was moved to tears twice in this incredible story.  The ending kicked me hard – right in the feels – and even though I was sobbing “Undo it! Undo it!” I really respect an author who makes such courageous decisions in their story.  Ms. Sheridan breathes new life into a theme that is currently all the rage.

Whether you prefer zombie books that showcase the gory side of zoms or lean more toward reading about the living as they fight the undead and deal with the apocalypse, you get it all in Mortality.  A great story that will appeal to many readers! I can hardly wait for the next installment in the Hitchhiker Strain series.


A huge thank-you to Patchwork Press and Netgalley for the copy of Mortality in exchange for my honest review.