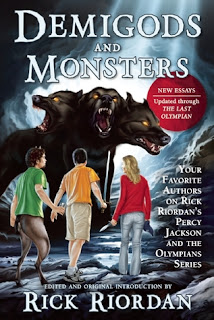 Which Greek god makes the best parent? Would you want to be one of Artemis’ Hunters? Why do so many monsters go into retail?

Spend a little more time in Percy Jackson’s world—a place where the gods bike among us, monsters man snack bars, and each of us has the potential to become a hero.

Find out: Why Dionysus might actually be the best director Camp Half-Blood could have.

How to recognize a monster when you see one.

Why even if we aren’t facing manticores and minotaurs, reading myth can still help us deal with the scary things in our own lives.

Plus, consult our glossary of people, places, and things from Greek myth: how Medusa got her snake hair extensions, why Chiron isn’t into partying and paintball like the rest of his centaur family, and the whole story on Percy’s mythical namesake.

A few years ago, our dear friend Nyssa at Read, Little Nyssa! suggested the Percy Jackson series to my daughter and co-blogger Mckenzie Kate (known around here as Katertot) to get her through her Harry Potter hangover... and it was love at first book.  She is obsessed with the series and the movie.  Demigods and Monsters is a book for both mom and daughter.  It caught me up on the series and got me excited for the movie; and, for Mckenzie, it was the ultimate fangirl handbook.  I’m turning this review over to her now since she is the Percy Jackson connoisseur at our house.

“Maybe the person sitting next to you on the bus is actually a demigod.
Or maybe the demigod is you.”

Demigods and Monsters is a great book to read to get caught up on several aspects of the Percy Jackson series. Especially before the upcoming movie, Sea of Monsters – which I’m really excited for.

In this book, there are several essays by different authors – including a fantastic, not-to-be-missed intro by Rick Riordan himself – and they’re all extremely enjoyable. It was fascinating getting so many of today’s popular authors’ takes on the Percy Jackson series. My favorite was “Why Do So Many Monsters Go Into Retail?” by Cameron Dokey, author of the Once Upon a Time series and How Not to Spend Your Senior Year. It was definitely the funniest of the essays and asked a pretty important question – why do so many monsters go into retail? I loved her explanation and reasoning for exactly why. I also liked “The Gods Among Us” by Elizabeth M. Rees and “Would You Want to Be One of Artemis’ Hunters?” by Carolyn MacCullough.

I enjoyed Demigods and Monsters; but – while this book is perfect for diehard fans of the Percy Jackson series – to a non-enthusiast, it may be information overload and could begin to sound like the same thing after a while. It was a very informative read, and I feel like it brought me up to speed on this series just in time for the new movie, Percy Jackson and the Sea of Monsters, coming out August 16th!


Thank you to Netgalley and Smart Pop for providing me with a copy of this book in exchange for my honest review.