Review: If You Stay (Beautifully Broken #1) by Courtney Cole 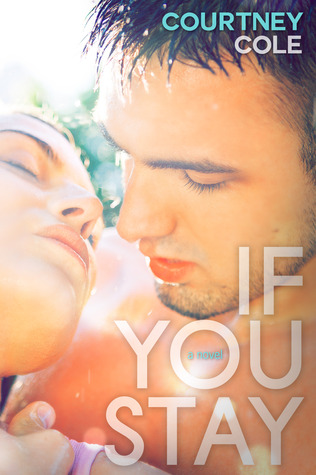 He’s a tattooed, rock-hard bad-boy with a bad attitude to match.

But he’s got his reasons.

His mother died when Pax was seven, leaving a hole in his heart filled with guilt although he doesn’t understand why. What he does know is that he and his dad are left alone and with more issues than they can count.

As Pax grew up, he tried to be the kid his father always wanted; the perfect golden boy, but it didn’t work. His dad couldn’t overcome his grief long enough to notice and Pax couldn’t keep up the impossible perfect façade. So he slipped far, far from it.

Now, he uses drugs and women to cope with the ugliness, the black void that he doesn’t want to deal with. If he pretends that the emptiness isn’t there, then it isn’t, right? Wrong.

And it’s never more apparent than when he meets Mila. Sweet, beautiful Mila Hill is the fresh air to his hardened frown, the beauty to his ugly heart. He doesn’t know how to not hurt her, but he quickly realizes that he’s got to figure it out because he needs her to breathe.

When memories of his mother’s death resurface from where he’s repressed them for so long, Mila is there to catch him when the guilt starts making sense. Mila is the one…the one who can save him from his broken troubled heart; from his issues, from the emptiness.

But only if he can stop being an asshole long enough to allow it.

He knows that. And he’s working on it.

But is that enough to make her stay?

I hate to start my review off with an expletive… but Pax is an a$$hole. I mean, it’s right there in the summary; and truer words have never been written.  But it’s so much worse than just an attitude problem.  He is on such a self-destructive path, and if something doesn’t change – and fast – Pax may never see his 25th birthday. Enter Mila. Beautiful, smart, and incredibly sweet.  She’s had a huge loss in her young life, though she handles it with such grace and bravery.  When she finds the terrible mess that is Pax Tate, she wants nothing more than to fix this broken man and help him all that she can.  But we all know you can’t help someone who doesn’t want to be helped. Will Mila be Pax’s saving grace; or will she be too terrified that, if she gives him her heart, he’ll make it as broken as he is?

“You’ve seen me at my worst.  Maybe you should see me at my best.”

It's my intention to not share too many details of the story.  This is something that should be read and felt firsthand.  I enjoyed every minute of Pax and Mila as they each braved new waters and worked to overcome their fears.

“‘I’ve never been attracted to a bad boy before.’
‘Well, I’ve never wanted to be good before,
so I guess it’s a first for both of us.’”

While the story brought me to tears several times, I want to mention the incredibly beautiful Author’s Note that reduced me to chin-quivering sobs. It is just as lovely and powerful as the story itself.

I really appreciate Ms. Cole sharing her note with her readers. I love her writing and how effortlessly she pulls such an emotional response from me. She is definitely on my auto-buy list; and I can hardly wait for book two of the series, If You Leave, which follows Mila’s older sister Madeline.

“But if you stay with me, if you stay…
I promise that I will never leave you again.”