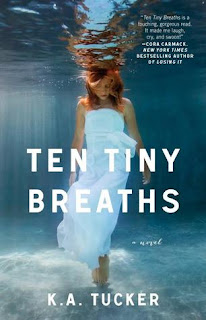 Four years after losing her parents, best friend, and boyfriend in a drunk driving accident, twenty-year-old Kacey Cleary runs away to begin a new life in Miami. Hardened by the tragedy, she's determined to keep everyone at a distance—until she meets an irresistible and mysterious neighbor who is determined to melt the ice over her heart.

Following the terrible tragedy that changed Kacey Cleary’s life forever, she and her younger sister Livie were forced to move in with their holier-than-thou aunt and alcoholic gambling addict Uncle Raymond.  After Uncle Raymond visits Livie’s room one night, Kacey finds an apartment online, buys two bus tickets, and disappears with Livie to start new lives and try to make a fresh start.

They move into an apartment complex in Miami where they meet some pretty fascinating people; and, even though Kacey would rather keep them at arm's length, she soon learns that sometimes people have a way of sneaking into your heart.

Kacey is one very interesting MC.  After the hell she went through, I found her new coping mechanism very intriguing and, admittedly, pretty awesome.  When she was released from the hospital having undergone extensive physiotherapy, she joined a gym where she spent hours every day lifting weights and doing cardio.

“…all the things that strengthened my shattered body
but did nothing to help my devastated soul.”

It wasn’t until someone suggested kickboxing that she found her perfect way to cope with the cards fate had dealt her. She was able to channel her anger and her hurt behind every kick and hit that she delivered to the bag.  It wasn’t quite enough to erase all the pain, but it helped her get by without falling apart.

And when Kacey meets Trent, the hunky new neighbor, she’s going to need a way to work out all the feelings that he stirs inside her.

She’s more than a little surprised when she begins to open up and tell Trent things she hasn’t shared with anyone.  Even more shocked when he proves to be exactly what she needs.

As opposed as she is to the idea, Kacey soon finds herself on the unexpected and frightening path of falling in love.

But as the ice begins to thaw from around her heart, she learns a secret that threatens to ruin everything and tear apart her new life and all the progress she’s made.  Has Kacey healed enough to take those ten tiny breaths and stay and fight... or will she run once again?

I enjoyed this story, though I confess the immediate attraction Kacey felt to Trent was a little hard for me to buy, and there were a few typographical errors in my ecopy that bothered me.  I figured out the big secret almost immediately, but that really didn’t stop me from becoming absorbed in where it was all leading.   Kacey is as broken as they come, but so is Trent. I was easily captivated by them both. I really enjoyed all of the secondary characters in this story - Kacey's neighbors and co-workers were pretty awesome, and I really liked the way they all took care of each other.  Another thing I adored about this book were the stages of grief that the author brilliantly worked into the titles. Ten Tiny Breaths definitely made for a heart-wrenching read, but I was pleased with the end results.

“‘Forever’s a long time.’ ‘Forever’s not long enough with you.’”

NOTE:  I'll be out of town for a few days with limited internet access, but I will reply to comments and return any visits I missed as soon as I'm back.  Have a wonderful week! <3
Posted by A Belle’s Tales at 12:01 AM
Email ThisBlogThis!Share to TwitterShare to FacebookShare to Pinterest
Labels: Book Reviews, Contemporary, Emotional Reads, New Adult