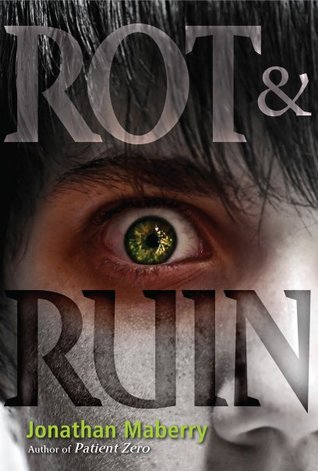 In the zombie-infested, post-apocalyptic America where Benny Imura lives, every teenager must find a job by the time they turn fifteen or get their rations cut in half. Benny doesn't want to apprentice as a zombie hunter with his boring older brother Tom, but he has no choice. He expects a tedious job whacking zoms for cash, but what he gets is a vocation that will teach him what it means to be human.

Hi, everyone! I haven’t guest-posted on the blog in a while (8th grade has been kicking my butt with research papers and science projects), so I’m super excited to be reviewing Rot & Ruin today! My mom and I read this one together a few weeks ago, and we loved it. She marked most of the quotes but turned over the reins to me for the reviewing. I want to thank Ms. Christy at Love of Books for recommending this series to us. I know it’s going to be a favorite :-)

“Man can live about forty days without food,
about three days without water,
about eight minutes without air,
but only for one second without hope.”
-- Author Unknown

Rot & Ruin is the story of Benny Imura and his life in Mountainside, a what-used-to-be-California settlement where some of Earth’s remaining people reside. Benny lives with his older half-brother Tom who, in his opinion, is a coward that left their parents for dead on First Night. When Benny fails to find a job in Mountainside, Tom convinces him to come along on one of his jobs in the Rot and Ruin, the wild terrain full of zombies, or “zoms.” Along this journey, not only does Benny realize that what Tom does isn’t just “killing zoms” for no reason; but he also starts to understand just how inaccurate his take on this post-apocalyptic world and its residents (dead or alive) actually is.

One of my favorite things about this story was seeing how Benny changed and grew as a character throughout the book. Benny learned to not hate the zoms so much but to respect them because, as Tom says, “they used to be people.” And eventually, he begins to understand and respect Tom as well, realizing his brother is not the coward Benny always thought him to be. Another thing I enjoyed was how the story was told in third person, giving the reader a glimpse into all the characters’ thoughts as opposed to just Benny’s. I also loved the fact that this was a kid who had never used or barely even heard of a microwave oven, let alone become accustomed to the things with which we are so familiar today. I love reading these kinds of stories where characters are not technology-obsessed -- checking emails, texting. It was so refreshing to read a story where none of those things even existed anymore.

--Benny: Benny was a great male protagonist that was really easy to root for. He may have started out an unconcerned kid with a bad attitude, but he grew into a mature, responsible person by the end of the story and that is something I really admire in a character.

--Tom: From his wise words to his superb fighting skills, Tom was not only an awesome character but an awesome brother and friend, too. He was always looking out for Benny and helping him understand the world around him the best he could.

--Nix: Can I just say this girl rocks? Because she does. She’s tough, smart, and has recently caught the eye of Benny; but best of all, she’s a writer. Or, at least, she wants to be. Nix keeps a journal in her pocket at all times so she can constantly write down stories and poems, and her way of thinking and saying things was unique, too. My kind of gal.


“She looked toward the east, as if she could see the fence line from Benny’s backyard. ‘You see the fence as something keeping the zoms out. I don’t. I see it as the thing that pens us in. We’re trapped here.
Trapped isn’t ‘alive.’ Trapped isn’t ‘safe.’ And it isn’t ‘free.’”

--I also really loved Benny’s other friends Morgie and Chong -- they were really enjoyable supporting characters as well and Chong was incredibly funny.


“‘You’re such a good friend, Benny, I’ll really miss you when you’re dead.’”

And Rob Sacchetto, who Benny learned a lot about the Rot and Ruin from:


“‘We’re living next door to the apocalypse, kid. It’s right on the other side of that big fence. The Rot and Ruin is the real world. Our town isn’t anything more than the last bits of mankind’s dream, and we’re stuck here until we die off.’”

I should mention, since this is listed as ages 12+, that aside from the expected zombie gore, there is some mild language. Also, Benny and his friends do think and talk about *ahem* breasts… a lot. But, after all, they are fifteen-year-old boys.

The bottom line? This is a fabulous, well-written (though occasionally overly descriptive) novel that contains an intriguing and different take on the world of zombies. I thoroughly enjoyed it and highly recommend it. We can’t wait to read Dust & Decay, the next book in the series.


“There are moments that define a person’s whole life. Moments in which everything they are and everything they may possibly become balance on a single decision. Life and death, hope and despair, victory and failure teeter precariously on the decision made at that moment. These are moments ungoverned by happenstance, untroubled by luck. These are the moments in which a person earns the right to live, or not.”

The songs I couldn't get out of my head for this story were "Wanted Dead or Alive" by Bon Jovi and "Zombie" by The Cranberries.  I like to think that if iPods had still been around, Benny would have had these songs playing on his.

Also, on the Amazon page of Rot & Ruin under “More About the Author,” it mentions that it is currently in film production! I can’t wait to see this one on the big screen.