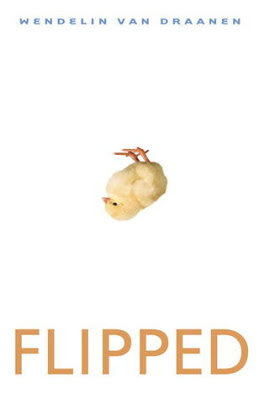 Flipped is a romance told in two voices. The first time Juli Baker saw Bryce Loski, she flipped. The first time Bryce saw Juli, he ran. That’s pretty much the pattern for these two neighbors until the eighth grade, when, just as Juli is realizing Bryce isn’t as wonderful as she thought, Bryce is starting to see that Juli is pretty amazing. How these two teens manage to see beyond the surface of things and come together makes for a comic and poignant romance.

Flipped by Wendelin Van Draanen is the story of Julianna Baker and Bryce Loski, two kids who attend the same school and live across the street from each other. Juli and Bryce don’t exactly get along; the not-getting-along part is mostly on Bryce’s side, considering he was a bit turned off by Juli from a young age when Juli was convinced she was in love with him. The best part of the story, in my opinion, was when their feelings for each other really did “flip”; Juli didn’t feel anything for Bryce anymore just as Bryce was starting to realize how he really felt about her.

Juli’s dad was the sweetest father I’ve ever read about in a book. He always knew what to say and when to say it. He was a painter and told her “a painting is more than the sum of its parts,” and when Juli was in her sycamore tree, she understood what it meant. I don’t want to give too much away about what happened, but I’ll share this quote that exemplifies not only the beautiful relationship between Juli and her father but also the amazing descriptions in this book:
“I pulled off the towel, and there was my tree. My beautiful, majestic sycamore tree. Through the branches he’d painted the fire of sunrise, and it seemed to me I could feel the wind. And way up in the tree was a tiny girl looking off into the distance, her cheeks flushed with wind. With joy. With magic.”
When I’m only on page 43 of the book and I’m already in tears, I know this is going to be a good book.
Also, Juli was my favorite character in the book because she not only appreciated the love for her from her parents, but she loved them just as much:
“I felt sorry for my father. I felt sorry for my mother.
But most of all, I felt lucky for me that they were mine.”
I feel so lucky that my parents are mine, so I could easily relate to this quote.
I highly recommend this book because it isn’t just for kids -- it has something for everyone. Lovable characters; a perfectly-paced, intriguing story; and humor throughout the whole book. A wonderful read.
Thank you to the ladies at the The Secret DMS Files of Fairday Morrow for letting me know about this great book!

Posted by A Belle’s Tales at 11:18 AM
Email ThisBlogThis!Share to TwitterShare to FacebookShare to Pinterest
Labels: Katertot reviews, MG