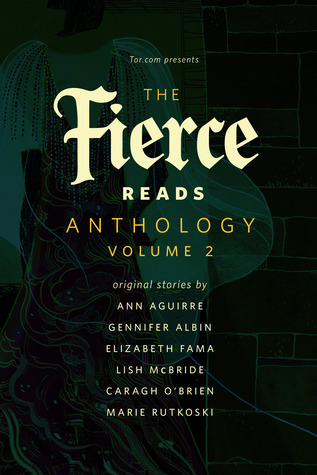 This book is free at both Amazon and Barnes&Noble (see links above).  It includes six short stories from YA authors, most of which are samples of or prequels to their published novels.  While several of these shorts can be found as extras on the author’s sites, a few are $.99 + at both retailers so I think having the entire volume for free is the way to go.

I downloaded this anthology specifically for the short story by Ann Aguirre, Foundation.  I am a huge fan of the Razorland series so, as soon as I realized there was a prequel that I hadn’t read, I had to have it!  It was excellent; and, for those of you who read the novella Endurance (the story of Stone and Thimble), you will want to read Foundation!  It was such a beautiful and heart-wrenching short.  I loved the way it explained so much and tied in with Endurance and Enclave!

The next story I was thrilled to find was a prequel to Cinder by Marissa Meyer titled Glitches.  I’ve really enjoyed the Lunar Chronicles, and it was great to read about how Cinder came into the lives of Garan, Adri, Pearl, and Peony.  My favorite part of this short was Cinder’s introduction to Iko, whom I have great affection for.  Peony is adorable, and I love the insight into her relationship with Cinder – this was especially poignant if you’ve read Cinder.

My most pleasant surprise was Gennifer Albin’s Department of Alterations, a prequel to Crewel.  For some reason, Crewel had not been on my radar, even though some of my blogger buddies seemed to enjoy it.  Well, the sneak peek of the first several chapters really intrigued me!  I was sad for it to end and have definitely bumped Crewel up on my reading list.

There is also a mermaid story from Elizabeth Fama, a story by Lish McBride, a post-apocalyptic story from Caragh M. O’Brien, and a paranormal alternate future from Marie Rutkoski.

This anthology includes the following stories:

Foundation by Ann Aguirre
The Department of Alterations by Gennifer Albin
Men Who Wish to Drown by Elizabeth Fama
Heads Will Roll by Lish McBride
Ruled by Caragh M. O'Brien
Jacks and Queens at the Green Mill by Marie Rutkoski

And the following bonus stories from Vol. 1:

The Witch of Duva by Leigh Bardugo
Glitches by Marissa Meyer

The bonus stories from The Fierce Anthology Reads: Volume 1 is also free on Amazon and B&N .  I’ve downloaded it, but it will be a while before I read it.  I’m not familiar with most of the authors so this will be a great way to sample and hopefully find some new books!


My only complaint is the lack of editing in most of these stories, but did I mention it’s FREE?

Posted by A Belle’s Tales at 4:08 PM
Email ThisBlogThis!Share to TwitterShare to FacebookShare to Pinterest
Labels: Anthology, Book Reviews