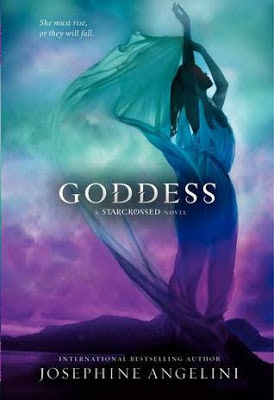 After accidentally unleashing the gods from their captivity on Olympus, Helen must find a way to re-imprison them without starting a devastating war. But the gods are angry, and their thirst for blood already has a body count.

To make matters worse, the Oracle reveals that a diabolical Tyrant is lurking among them, which drives a wedge between the once-solid group of friends. As the gods use the Scions against one another, Lucas’s life hangs in the balance. Still unsure whether she loves him or Orion, Helen is forced to make a terrifying decision, for war is coming to her shores.

In Josephine Angelini’s compelling conclusion to the masterfully woven Starcrossed trilogy, a goddess must rise above it all to change a destiny that’s been written in the stars. With worlds built just as fast as they crumble, love and war collide in an all-out battle that will leave no question unanswered and no heart untouched.

I absolutely loved Starcrossed, and this
series has some of the most gorgeous covers!

What book are YOU waiting to get your hands on?
Posted by A Belle’s Tales at 12:08 PM
Email ThisBlogThis!Share to TwitterShare to FacebookShare to Pinterest
Labels: memes, Mythology, WoW