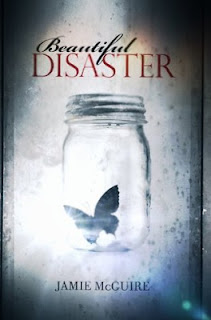 Abby Abernathy is a good girl. She doesn’t drink or swear, and she has the appropriate number of cardigans in her wardrobe. Abby believes she has enough distance from the darkness of her past, but when she arrives at college with her best friend, her path to a new beginning is quickly challenged by Eastern University’s Walking One-Night Stand.

Travis Maddox, lean, cut, and covered in tattoos, is exactly what Abby wants—and needs—to avoid. He spends his nights winning money in a floating fight ring, and his days as the ultimate college campus charmer. Intrigued by Abby’s resistance to his appeal, Travis tricks her into his daily life with a simple bet. If he loses, he must remain abstinent for a month. If Abby loses, she must live in Travis’s apartment for the same amount of time. Either way, Travis has no idea that he has met his match.

I’m not entirely sure where to begin when it comes to Beautiful Disaster. There were things I thoroughly disliked about this book and certain things I found entirely compelling, ultimately leaving me to struggle with my review. I compare reading this book to something akin to ‘rubbernecking.’ You know, when you see an accident and etiquette determines that you shouldn’t look, but human nature won’t have you look anywhere else? I thought I should put it down and stop reading… but I couldn’t bring myself to look away. I completely understand why readers have such a love/hate relationship with this book, and it really comes down to the reader as to which category they will choose to place Beautiful Disaster in.

I get the draw that fans have to Travis Maddox, and I have friends who think he’s downright dreamy, but let’s be honest here: The boy has issues. Definite issues. But at least he doesn’t pretend to be anything other than Travis.. I like that he’s upfront and a take-me-as-I-am kind of guy. Now, Abby is a different story. For me, she was the ultimate disaster. She was pretending to be someone she was not, and my biggest complaint about her character is what she put Travis through. If you care for someone who suffers from the problems that Travis does, why would you put him on such an emotional roller coaster? Abby inflicts more damage on Travis than his fighting matches ever did. And that friend of hers? Please. I’ve had my share of vacillating and temperamental friends, but America takes the cake. The writing contained errors and inconsistencies, but the story did hold my interest and, at times, became quite absorbing. Then there were things being thrown my way that were very distracting and didn’t flow within the story as they should: a puppy, a fire, a trip to Vegas… oh my!

My biggest concern with Beautiful Disaster is that an impressionable teen will romanticize the obsessive/possessive relationship shared by Travis and Abby. Being stalked is not romantic. Co-dependency is not beautiful - it’s simply a disaster. A controlling, irrational disaster.

Even in the midst of all I found disagreeable in the story, Travis stayed on my mind longer than I would have liked. While I don’t have plans to read Walking Disaster (from his POV), I do have a morbid curiosity to his innermost thoughts. The problem is I’ve had enough of Abby to last me a lifetime.

Posted by A Belle’s Tales at 1:20 PM
Email ThisBlogThis!Share to TwitterShare to FacebookShare to Pinterest
Labels: ARCs, Book Reviews