Review and Giveaway: Confessions of an Alli Cat (The Cougar Chronicles #1) by Courtney Cole 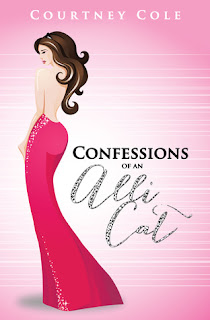 Thirty-five year-old Allison “Alli” Lancaster has it all—a fabulous job, a beautiful 15 year-old daughter, a hilarious BFF and a gorgeous house with a pool and Jacuzzi in an exclusive Las Vegas neighborhood. What she doesn’t have is a husband, because she kicked her lousy, cheating ex to the curb nine months ago. Since then, Alli has paid her dues with seemingly endless self-improvement and seemingly endless mourning. Now she’s ready to move on and try new things.

Alli’s idea of “trying new things” is nothing like that devil-of-a-best-friend of hers. Somehow, Sara, the devil of a best friend, talks Alli into trying out a sex toy, sleeping with a younger man and letting a stranger in a lab jacket put hot wax on a place that should never, ever, ever see wax. And that’s only the beginning.

Alli never saw her life going quite like this. She also never thought she’d meet someone else who had the very real potential to change her life forever.

Enter the new guy. He’s gorgeous, refined and mature. He’s also marriage material. But that poses a problem for Alli, who renounced the institution of marriage when she renounced her ex. What’s a girl to do?

They say that what happens in Vegas, stays in Vegas. But what the heck happens when you can’t leave Vegas? Well, you spin the wheel, of course. You play the game and let the chips fall where they may.

Alli just hopes she can find them all.

It’s no secret that I love YA / Paranormal-romance. It fills 95% of my bookshelves. I love monsters and I love, love, love that sweet, young, fresh-from-the-oven, butterflies-in-my-tummy lovin’. But not being a ‘young’ adult for more than a few years now... sometimes… every once in a while… mama needs a big girl book. And I just so happen to have a big girl book guru: the always hilarious, often inappropriate, and much-loved April from Sim-Sational Books. When I read her review of Confessions of an Alli Cat, I knew I was going to love this book!

Alli is a 35-year-old divorcee who’s ex-husband is King of the Asshats. She’s discovered that, during the course of their 15-year marriage, he cheated on her numerous times, and… well, you know the saying, “Hell hath no fury…”

Thanks to Alli’s best friend Sara, Alli is about to rediscover the hot, young vixen that she’s been deep down all along. And Shade is just the strapping young lad to help her with that discovery.

This is a laugh-out-loud, couldn’t-have-pried-this-book-from-my-cold-dead-hands story that I read in one sitting! I could say so many things about this book, but that would ruin the fun of finding out the delicious details yourself. I loved and, at times, sympathized with Alli (ie: waxing - something that, in my opinion, had to have been invented by a Satan-worshipping, sadistic, jilted, impotent little Nazi with a bug up his butt the size of an emu).

As funny and sexy as this book was, there was also an extremely valuable message for all women (but especially important for us over-30 ladies):


“‘Men like to look,’ he explains.
‘And women don’t usually like to be looked at.
They feel vulnerable, exposed.
They are self-conscious about their perceived flaws.
What they don’t understand is that men don’t
see them the same way they see themselves.
We see curves and we love those curves.
Confidence is sexy as hell, Alli Cat.’”

Where has this amazing author been all my life? I want to read everything Ms. Cole has ever written!

I loved Confessions of an Alli Cat so much that I wanted to share the love and give away an ebook to one lucky winner. Just fill out the Rafflecopter form below for your chance to win!

But remember: This is an adult book - a big girl, hot mama book - with mature themes. If you are a kiddo or someone who is easily offended by saucy language or people having sexy times… move along… nothing to see here! ;)

a Rafflecopter giveaway
Posted by A Belle’s Tales at 12:23 AM
Email ThisBlogThis!Share to TwitterShare to FacebookShare to Pinterest
Labels: Book Reviews, Cougar Chronicles, Courtney Cole, Hot-Mama-Books