The Lost Prince (The Iron Fey: Call of the Forgotten #1) by Julie Kagawa 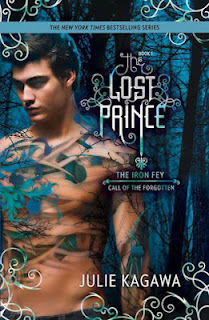 Don’t look at Them.  Never let Them know you can see Them.

That is Ethan Chase’s unbreakable rule. Until the fey he avoids at all costs—including his reputation—begin to disappear, and Ethan is attacked. Now he must change the rules to protect his family. To save a girl he never thought he’s dare to fall for.

Ethan thought he had protected himself from his older sister’s world—the land of Faery. His previous time in the Iron Realm left him with nothing but fear and disgust for the world Meghan Chase has made her home, a land of myths and talking cats, of magic and seductive enemies. But when destiny comes for Ethan, there is no escape from a danger long, long forgotten.

My name is Ethan Chase. And I may not live to see my eighteenth birthday.

I was always fond of Meghan Chase’s little brother Ethan when I was reading The Iron Fey series. Such a loveable kiddo. I can’t tell you how many times I wondered, “What about little Ethan?” Well, that sweet little boy is all grown up in The Lost Prince. Now, he’s a sullen teenager, complete with snark and a grown-up attitude. He keeps everyone at arms’ length, and he’s just a tad bitter about everything he went through as a kid.

Ethan is starting a new school… again. The major difference this time is that his plan to keep his classmates away with his off-putting attitude fails miserably with one particular student: Mackenzie St. James. Kenzie is way too curious to pass up an opportunity to get to know the mysterious Ethan Chase and find out all of his secrets. Kenzie has a secret of her own, and she’s not afraid of anyone or anything. Throw in a half-phouka named Todd who also wants to befriend him, and Ethan realizes his loner status isn’t going to be so easy to hold onto.

Ethan is surprised when Kenzie shows up at his Kali tournament to take notes and photos for the school paper. The fact that I’m completely athletically challenged made how much I enjoyed reading about Kali a wonderful surprise. Kali is a Filipino martial art that Ethan participates and excels in. I had never heard of it until I read The Lost Prince, and Kagawa’s stunning imagery and vivid details made it so easy to picture. The patterns described reminded me of a beautiful choreographed dance, and I felt as if I were in the audience watching Ethan’s gorgeous demonstration.

Shortly after the demonstration is where Ethan’s real adventure begins. No matter how hard he has tried to avoid the fey, there’s no fighting fate; and Ethan finds himself returning to the one place he said he never would.

This is Ethan’s story, and it’s a great one.

While the book belongs to Ethan, there are several cameos and surprise visits from our most beloved characters of the Iron Fey series. I’m not naming any names, though, because the fun is in the discovery and squealing like a fangirl enjoying those moments immensely.

Ms. Kagawa is the queen of chapter cliffhangers. For me, that whole “I’m really going to bed when I reach the end of this chapter” plan is an unachievable goal and one that I quickly gave up on. It was impossible to not continue to the next, and the vicious cycle continued until I’d reached that last page. One lost night of sleep is well worth it when you are in the Nevernever and this author is telling the story. Fans of The Iron Fey series will enjoy returning to the magical land Ms. Kagawa created.  This author's talent and creativity continue to blow me away.

Since The Lost Prince is from Ethan’s POV and gives us a peek into his inner thoughts, it doesn’t take long to realize that, deep down, he’s still the sweet boy we all love; however, I really don’t want to say anything else because I’m a stickler for avoiding those dreaded spoilers. I’ll close with mentioning how much I love that the fey pay tribute to Shakespeare:


“…the great Bard, the mortal who opened people’s minds, again to magic.
Who made humans remember us once more.”

So, if you see a glimmer in the forest or, for a split second, glimpse pointed ears on your next door neighbor, thank Julie Kagawa for helping us remember the fey and keeping their magic alive ;-)

Thank you to Harlequin Teen and Netgalley for providing me with an ARC of this book in exchange for my honest review.