Something Wicked Comes: Giveaway and Katertot's Review of Monster Blood by R.L. Stine

I'm so excited to be a part of Something Wicked Comes, hosted by Rainy Day Ramblings and Babbling About Books.  Thank you, Ms. Heidi, for inviting me to take part and thank you, Mom, for handing over your blog for the week!  I'm reviewing Monster Blood (Goosebumps #3); and, after the review, I have a giveaway for you guys!  Thanks so much for stopping by!
~ Katertot 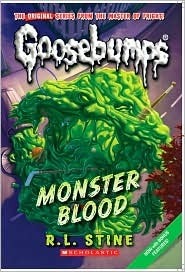 While staying with his weird great-aunt Kathryn, Evan visits a funky old toy store and buys a dusty can of monster blood. It's fun to play with at first. And Evan's dog, Trigger, likes it so much, he eats some!

Reader beware-you're in for a scare!

While Evan’s parents house hunt in Florida, he is staying with his Aunt Kathryn, who he’s never met before in his life. From the start, they don’t get along very well. They both keep to themselves and don’t speak much -- Evan especially doesn’t speak much, considering Aunt Kathryn is deaf.

Before long, Evan makes a neighborhood friend -- Andy, a girl his age -- and thinks maybe this situation isn’t so bad after all. They visit a seemingly abandoned toy store (Andy swears it’s not abandoned) and find an interesting can of something called “monster blood.”

You know those Syfy movies that you just can't look away from no matter how bad they get? That's how this book was: pretty cheesy, but I had to read on to the end.

Usually, I have a section in my review where I list my favorite characters, but, aside from Aunt Kathryn, Trigger, and Andy, these characters just weren’t my cup of tea. The lead character, Evan, wasn't all that likable -- he was a bit bratty and annoying. The other supporting characters, Rick and his brother, were the neighborhood bullies. This, in particular, bothered me, because I recently did a post here on my mom's blog about bullying with Heidi from Rainy Day Ramblings and Nyssa. I understand what Heidi meant about how some books introduce bullies but never really do anything about them. These bullies weren't really dealt with by anyone… unless you count the monster blood…

I love R.L. Stine and his Goosebumps series, but this just wasn’t one of my favorites. I would recommend it to kids twelve and under with the hope that it would lead to possible discussions with their parents about bullying.

Now for the giveaway:
'Tis the season for spooky books, and what better to buy your books with?
A $20.00 gift card from your choice of Amazon or Barnes & Noble!
Just fill out the Rafflecopter form for your chance to win.
Thanks so much for stopping by and good luck!
a Rafflecopter giveaway
Posted by A Belle’s Tales at 12:28 AM
Email ThisBlogThis!Share to TwitterShare to FacebookShare to Pinterest
Labels: Book Reviews, Katertot reviews