I'm pleased to be a part of the blog tour for Extraordinary Rendition by Paul Batista, who has kindly shared an excerpt from his exciting book. 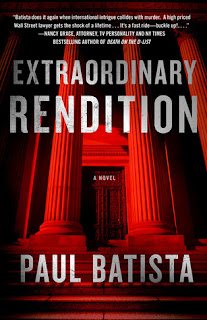 When Ali Hussein—suspected terrorist and alleged banker for Al Qaeda—is finally transported from Gitmo to the US mainland to stand trial, many are stunned when Byron Carlos Johnson, pre-eminent lawyer and the son of a high-profile diplomat, volunteers as counsel. On principle, Johnson thought he was merely defending a man unjustly captured through Rendition and water-boarded illegally. But Johnson soon learns that there is much more at stake than one man’s civil rights.

Hussein’s intimate knowledge of key financial transactions could lead to the capture of—or the unabated funding of—the world’s most dangerous terror cells. This makes Hussein the target of corrupt US intelligence forces on one side, and ruthless international terrorists on the other. And, it puts Byron Carlos Johnson squarely in the crosshairs of both.

Pulled irresistibly by forces he can and cannot see, Johnson enters a lethal maze of espionage, manipulation, legal traps and murder. And when his life, his love, and his acclaimed principles are on the line, Johnson may have one gambit left that can save them all; a play that even his confidants could not have anticipated. He must become the hunter among hunters in the deadliest game.

Written by no-holds-barred-attorney Paul Batista, Extraordinary Rendition excels not only as an action thriller, but as a sophisticated legal procedural as well; tearing the curtains away from the nation’s most controversial issues.

Provocative. Smart. Heart-pounding. A legal thriller of the highest order.

When the guard left, the iron door resonated briefly as the magnetic lock engaged itself. Byron sat in a steel folding chair. Directly in front of him was a narrow ledge under a multi-layered, almost opaque plastic window, in the middle of which was a metal circle.

Ali Hussein seemed to just materialize in the small space behind the partition. Dressed in a yellow jumpsuit printed with the initials “FDC” for “Federal Detention Center,” Hussein, who had been described to Byron as an accountant trained at Seton Hall, in Newark, was a slender man who appeared far more mild-mannered than Byron expected. He wore cloth slippers with no shoelaces. The waistband of his jump suit was elasticized—not even a cloth belt. He had as little access to hard objects as possible.

He waited for Byron to speak first. Leaning toward the metal speaker in the partition and raising his voice, Byron said, “You are Mr. Hussein, aren’t you?”

The lawyers at the Civil Liberties Union who had first contacted Byron told him that, in their limited experience with accused terrorists, it sometimes wasn’t clear what their real names were. There were often no fingerprints or DNA samples that could confirm their identities. The name Ali Hussein was as common as a coin. It was as though genetic markers and their histories began only at the moment of their arrest.

“I am.” He spoke perfect, unaccented English. “I don’t know what your name is.”

The circular speaker in the window, although it created a tinny sound, worked well. Byron lowered his voice. “I’m Byron Johnson. I’m a lawyer from New York. I met your brother. Did he tell you to expect me?”

“I haven’t heard from my brother in years. He has no idea how to reach me, I can’t reach him.”

“Has anyone told you why you’re here?”

“Someone on the airplane—I don’t know who he was, I was blind-folded—said I was being brought here because I’d been charged with a crime. He said I could have a lawyer. Are you that lawyer?”

All that Ali’s more abrasive, more aggressive brother had told Byron was that Ali was born in Syria, moved as a child with his family to Lebanon during the civil war in the 1980s, and then came to the United States. Ali never became a United States citizen. Five months after the invasion of Iraq, he traveled to Germany to do freelance accounting work for an American corporation for what was scheduled to be a ten-day visit. While Ali was in Germany, his brother said, he had simply disappeared, as if waved out of existence. His family had written repeatedly to the State Department, the CIA, and the local congressman. They were letters sent into a vacuum. Nobody ever answered.

Byron asked, “Do you know where you’ve come from?”

Byron began to reach for his wallet, where he stored his business cards. He caught himself because of the absurdity of that: he could have any number of fake business cards. Engraved with gold lettering, his real business card had his name and the name of his law firm, one of the oldest and largest in the country. Ali Hussein was obviously too intelligent, too alert, and too suspicious to be convinced by a name on a business card or a license or a credit card.

“I don’t have any way of proving who I am. I can just tell you that I’m Byron Johnson, I’ve been a lawyer for years, I live in New York, and I was asked by your brother and others to represent you.” 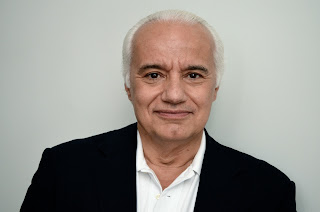 Paul Batista, novelist and television personality, is one of the most widely known trial lawyers in the country. As a trial attorney, he specializes in federal criminal litigation. As a media figure, he is known for his regular appearances as guest legal commentator on a variety of television shows including, Court TV, CNN, HLN and WNBC. He’s also appeared in the HBO movie, You Don't Know Jack, starring Al Pacino.

A prolific writer, Batista authored the leading treatise on the primary federal anti-racketeering statute, Civil RICO Practice Manual, which is now in its third edition (Wiley & Sons, 1987; Wolters Kluwer, 2008). He has written articles for The New York Times, The Wall Street Journal, and The National Law Journal.

Batista is a graduate of Bowdoin College, where he was elected to Phi Beta Kappa, and Cornell Law School. He’s proud to have served in the United States Army. Paul Batista lives in New York City and Sag Harbor, New York. Thank you to Astor + Blue Editions LLC, Paul Batista, and Lauren Marceau for sharing this excerpt from Paul's thrilling new novel, Extraordinary Rendition.
Posted by A Belle’s Tales at 12:12 AM
Email ThisBlogThis!Share to TwitterShare to FacebookShare to Pinterest
Labels: Blog Tour, Excerpts