Call of the Wild by Jack London 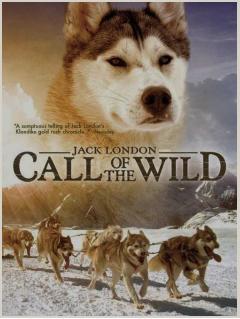 'Deep in the forest a call was sounding, and . . . he felt compelled to turn his back upon the fire, and to plunge into the forest.'

Half St. Bernard, half sheepdog, Buck is stolen away from his comfortable life as a pet in California and sold to dog traders. He soon finds himself aboard a ship, on its way to Northern Canada. Surrounded by cruelty, Buck's natural instincts and behaviour begin to emerge as he works as a mail carrying sled dog, scavenging for food, protecting himself against other dogs and sleeping out in the cold snow.

Sold to a group of American gold hunters who are inexperienced living in the wilderness, the dogs are treated badly and as misfortune besets them, Buck is saved by John Thornton. Indebted to his new master, Buck remains by Thornton's side, saving him from drowning and protecting him with fierce loyalty throughout their time together. However, Buck can not deny the strong lure of the wilderness around him.

Exciting and action-packed, THE CALL OF THE WILD explores the timeless relationship between man and dog, and the inevitable draw of primitive instincts that pull Buck away from civilization and humanity towards the lawless and harsh wilderness.

For my recent school book report, I chose to read Call of the Wild.  Since I'm filling in for my mom this week while she recovers from the flu, I thought I would share my report with all of you.  I'd love to know if any of you read this amazing classic when you were in school! ~ Katertot

Call of the Wild by Jack London is the heart-wrenching story of Buck, a spirited St. Bernard/sheepdog who is abruptly transferred from his comfortable life in a loving home to the cold, harsh snowy terrain of Alaska, where he accompanies several people along the way as part of a sled team. The reader plainly sees, in Buck’s journey, that hard work always makes it possible to accomplish something difficult.

Buck (from whose perspective the story is told) is used to common dog things: running in the sun, walking with his boys, lying at the feet of his master. This story, set in 1897, really begins when a money-seeking gardener’s helper, Manuel, sells him to a strange man. Buck travels across the country for a long time, being abused along the way. When Francois and Perrault buy him and Curly the New-foundland for use in a husky sled team, Buck realizes that his life is about to take a very interesting turn. Once in Alaska, Buck is faced with the hardships of the job of a husky: freezing snow and weather, small amounts of food, long distances to run every day, etc. Although Buck’s recently-acquired life and tasks have taken a serious toll on him and, at times in the past, overcome him, he soon realizes something important, which is also the moral of the story: No matter what events transpire in life, it is always possible to overcome or work through them if you try hard enough. Determination is key; never give up, because you can always come out the victor over a hardship in life.

Eventually, when Buck and his new master are in the forest, Buck realizes something he never did before: he was never meant to be a pet. He is finally where he belongs. Even though he never listened, he has always been beckoned by the call of the wild.

Several heart-breaking, amusing, and tense events all stood out in this book, making it even more enjoyable and not just a story about a determined dog. Unexpected twists and turns keep the reader interested most of the time, though the story did tend to drag a bit in certain places; but in no time, the story sped back up and put me right back on the edge of my seat. The writing in Call of the Wild was beautiful and extremely descriptive. Jack London had a true gift for writing. Even if the reader is not a fan of dogs or fast-paced, heart-pounding adventure, this book is sure to win them over, because it contains something for all readers.

Posted by A Belle’s Tales at 12:01 AM
Email ThisBlogThis!Share to TwitterShare to FacebookShare to Pinterest
Labels: Book Reviews, Katertot reviews