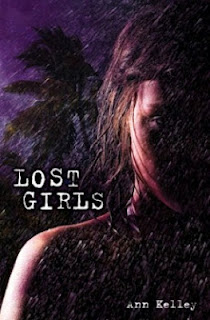 No parents. No rules. No way home.

Fourteen-year-old Bonnie MacDonald couldn't be more excited for a camping trip on an island off the coast of Thailand with her fellow Amelia Earhart Cadets-the daughters of the men and women stationed there during the Vietnam War. But when a strong current deposits the girls on what their boatman calls the "forbidden island," things take a turn for the worse: A powerful storm comes to destroy their campsite, the smallest of the junior cadets is found dead, and their boatman never returns. What once seemed like a vacation in paradise has become a battle against the elements.

Peppered with short, frantic entries from Bonnie's journal, Lost Girls is a page-turning, heart-pounding adventure story about a group of teen girls fighting for their lives.

Lost Girls by Ann Kelley was a heart-pounding book that I eagerly read within two days. Ms. Kelley wrote this story perfectly, which is difficult to do with an action or adventure story. She made the events of the story believable and didn’t go overboard with injuries or death. Lost Girls was an amazing book that I’ll be revisiting for sure!

I was shocked - and intrigued - by the fact that the author didn’t wait a hot second before killing off a little girl in a gruesome way (vivid details were not given). I knew that, when that happened, I was in for quite a ride. And boy did Ms. Kelley take me on one! She fills the pages of her book with entries from the main character Bonnie MacDonald’s journal. Bonnie is a fourteen-year-old girl currently living in Thailand with her mother - her father is a soldier, so they are stationed there for the time being. When Bonnie and her Amelia Earhart Cadet group go off for three days to survive on an island in the middle of the sea, things turn bad in the blink of an eye. Horrible storms and winds, a dangerous ocean in which no one can sail (yet another reason to lose hope of ever being saved), and a forest filled with wild boars, tigers, snakes, and more. Can Bonnie pull together a plan and get everyone off the island alive?

The elements seem to be against Bonnie and her peers as they try to stay alive in the wilderness of a supposedly forbidden island. I found that it was easy to get lost in the story and feel as if I were one of the girls myself. This book was very emotional for me in some parts: when Bonnie met the monk, when Layla Campbell realized she needed to step up her game… when a beloved character died.

--- Bonnie MacDonald - Bonnie was one of my favorite characters in this book because, although she was fourteen, she kept her focus and was able to keep everyone alive for weeks, with help from her friends, but hardly any from their leader.

--- Layla Campbell - Mrs. Campbell was an interesting character. Her bad definitely outweighed her good in some points. When things got bad, she turned to alcohol and drugs, and, unfortunately, encouraged two of the girls to join her, which, sadly, they did without hesitation. She even kept whiskey for herself when it could have saved another girl’s life. After a traumatic event, Layla was forced with the incredible decision of giving up or becoming the leader she should have been all along.

--- Jas - Jas was such a wonderful character. Also one of my favorites. She knew so much and it was her knowledge, education, and survival skills that helped the group stay alive, too. She was always telling people things about animals and plants they found on the island. I admired that greatly.

--- Hope - My favorite character, Hope, was the one I felt the worst for. Her father was unspeakably cruel to her. Hope was easy to love. She had a hard life, though, and it showed in her stutter and lack of courage and confidence in herself. I loved Hope's fight to overcome her stutter, her will to gain the other girls' respect, and her struggle to obtain bravery and confidence. Really someone to look up to.

I could go on all day long about Lost Girls, but I don’t want to give too much away. Lost Girls was an amazing book by a very talented author. I would absolutely love to see it made into a movie - I already know who I would want to play some of the characters. I will definitely be reading more of Ann Kelley’s work, as she sure knows how to pull a reader in!

Lost Girls was a very intense book, and some scenes might upset younger readers, especially when the little girl dies in the very beginning. I was able to relate more to this story because the characters were older and more mature than some of the middle-grade books I’ve recently read. Also, there is a bit of mild language in this book. These features make the book more YA than middle-grade, which is why I recommend it to readers thirteen/fourteen and up. I believe this story would appeal to any reader of or over that age because it contains something for everybody.