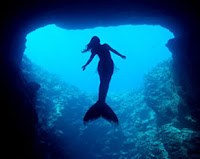 I am somersault-turning, jumping-up-and-down excited to announce that Anne Greenwood Brown, author of the fabulous Lies Beneath, will be joining me on the blog Tuesday, June 5th for an interview, giveaway, and......wait for it.... a TEASER from Deep Betrayal (Lies Beneath #2)!! Guys, you won’t believe the amazing gifts she is giving away! Hope you get a chance to stop by!


Here is my review of Lies Beneath: 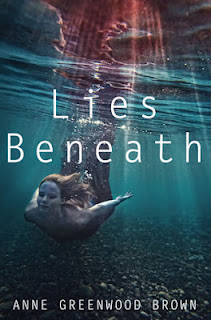 Calder White lives in the cold, clear waters of Lake Superior, the only brother in a family of murderous mermaids. To survive, Calder and his sisters prey on humans, killing them to absorb their energy. But this summer the underwater clan targets Jason Hancock out of pure revenge. They blame Hancock for their mother's death and have been waiting a long time for him to return to his family's homestead on the lake. Hancock has a fear of water, so to lure him in, Calder sets out to seduce Hancock's daughter, Lily. Easy enough—especially as Calder has lots of practice using his irresistible good looks and charm on unsuspecting girls. Only this time Calder screws everything up: he falls for Lily—just as Lily starts to suspect that there's more to the monsters-in-the-lake legends than she ever imagined. And just as his sisters are losing patience with him.

“Mother, may I go out to swim?
Yes, my darling daughter.
Fold your clothes up neat and trim,
But don’t go near the water.” - Anonymous

Lately, I’ve found myself holding back from reading the synopsis of a book.   I don’t want any spoilers, so all I knew about Lies Beneath was that it involved merpeople, which I gathered from that gorgeous cover. I admit that my experience with mermaids didn’t reach beyond Ariel and Prince Eric, so I thought Lies Beneath would be a light, funny, albeit, slightly more mature, version of the above mentioned movie. That sound you hear is my silly misconceptions coming to a screeching halt. Mermaids are hawt... and... naughty! I was spellbound from the first page! These are not your Disney mermaids, and the ancient fairytales and legends had it ALL wrong:


“Forget everything you think you know about merpeople.
Forget that freaking Ariel,  think Silence of the Lambs, think Friday the Thirteenth.
Haven’t you heard anything I said to you today?
They. Will. Kill. You.”

Is that a convincing quote, or what? How about the very first line of the story?:


“I haven’t killed anyone all winter, and I have to say I felt pretty good about that.”

I adore a male POV, and the author handled this one flawlessly. I wish there were more books from the male’s perspective, but I believe Calder as the male lead is one of my favorites. I love that I just couldn’t quite decide if he was a good guy or a not-so-good guy. I found myself cheering for him... even at times when, perhaps, I shouldn’t have. The character development throughout the story was incredible. Sure, he’s gorgeous, and it’s not like he can help being arrogant (it’s practically part of his DNA), but he also has depth and a purpose. Two purposes to be exact. One is revenge, and the other... freedom. Unfortunately for Calder, they come in that order.

Calder never could have imagined himself falling for a human. Especially not a human who was the descendant of the man responsible for his mother’s death. An old grudge that is finally going to be settled. All he has to do is get close to Lily, lure her in so he and his sisters can use her as bait, and finally get vengeance on her father and closure for their mother’s death. Easy. Or, at least, it would have been until Calder did the unthinkable: He fell for her.

Lily is a great heroine. She’s smart, non-whiny, and completely unaware of her looks. She doesn’t fawn over every guy she meets, and in no way, is she the type to have ‘insta-love’ with any boy, despite his mysterious good looks. She has just the right amount of toughness, sarcasm, and wit - enough to entertain the reader and, most importantly... Calder. Definitely an admirable female lead.

Calder’s sisters were so much fun to read about! While they were beyond scary to me, I found myself being mesmerized by them much in the same way their unwilling victims probably were.

Anne Greenwood Brown’s markedly descriptive imagery of Lake Superior, and especially the underwater details, are breathtaking! Her beautiful writing and vivid descriptions of Lake Superior's surrounding areas make me want to visit the town of Bayfield. Although, if I ever do, you can rest assured I won’t put so much as a pinkie toe in the water. I was so consumed by this story, that in a particular scene describing an underwater swim, I realized I was actually holding my breath!

I loved this book and all of its characters!  I’m extremely excited for Deep Betrayal (book 2), out 2013, so I will be able to immerse myself (no pun intended) in more of this story. I highly recommend this book and this fabulous author!

An ARC of this book was provided by Netgalley for review.
Posted by A Belle’s Tales at 3:00 PM
Email ThisBlogThis!Share to TwitterShare to FacebookShare to Pinterest
Labels: Giveaways, Interviews, Lies Beneath, Mermaids