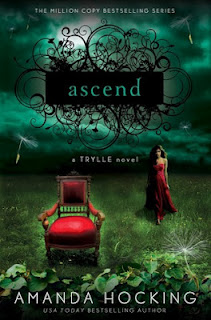 The final book in the Trylle Trilogy..


With a war looming on the horizon, Wendy's fate seems sealed.But everything she sacrificed might be in vain if she can't save the ones she loves. Her whole life has been leading up to this, and it's all coming to an end.

This is a young adult paranormal romance with some
mild language and mild sexual situations.

This is a difficult review to write. Not because I’m at a loss for words - because I have too many! I’m about to burst at the seams needing to vent to someone about everything that went down in the final installment of The Trylle Trilogy. What are you trying to do to me, Amanda Hocking? How am I going to express any of my opinions here without giving anything away from the book? I suppose I will stick to safe topics, and this review may go down as one of the shortest in my little blogging history.


Normally, I like to gush about the yummy male characters, but I think I did enough of that in my last two reviews. I’m actually excited to talk about Wendy this time. I’ve had definite issues with her in the last two books, but talk about character development! Wendy really grew into a likeable heroine who worked hard to earn the respect of not only her peers, but the respect of the readers. She showed strength and compassion in Ascend, and, while I didn’t agree with everything she did or certain choices she made, I am very pleased with how Wendy matured and the young woman she grew into. She’s no Remy, but she definitely wins most improved.

Another shocker was that I, albeit begrudgingly, changed my opinion about Elora. Oh, I fought it, believe me... but, when all was revealed, I certainly saw things from a different point of view.

I will miss these characters, and, even though it ended a lot differently than I would have thought, I enjoyed everyone’s happily-ever-after. The glimpse into their future lives was very satisfying and gave some closure no matter what “team” you were on. I will hold out hope that Finn will get his own book one day - he is not a character that I am ready to say goodbye to.


Note:  This is a young adult paranormal romance with some mild language and mild sexual situations.

Posted by A Belle’s Tales at 11:37 AM
Email ThisBlogThis!Share to TwitterShare to FacebookShare to Pinterest
Labels: Amanda Hocking, Book Reviews, Trylle