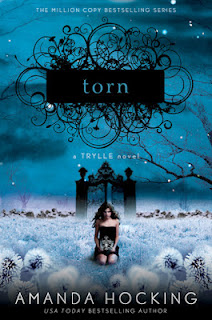 Wendy Everly was shocked to learn she is a changeling switched at birth. In Torn, book two in Amanda Hocking’s Trylle series, her story continues in a world where nothing is as it seems….

Wendy’s connection to her Vittra rivals is very close; they will stop at nothing to lure her to their side. Yet, with the threat of war looming, Wendy’s best hope of saving the Trylle is to master her powers—and marry a royal who is her equal. But how can she walk away from Finn, her handsome, off-limits bodyguard? And then there’s Loki, a Vittra prince with whom she shares an attraction.

Only Wendy can decide her fate, but she recognizes that making the wrong choice could cost her everything—and everybody—she’s ever wanted…in both worlds.

It’s not often that I enjoy a sequel even more than I enjoy the first book in a series, but I am happy to say that this is the case with The Trylle Trilogy. I loved Torn! I read it in one sitting and am wielding enormous amounts of willpower to stop and write this review instead of diving right into Ascend, the third book in the series.


Normally, I’m a bit suspicious when new characters are introduced in a sequel, but Oren, Sara, Loki, and Duncan are all fascinating characters that I immediately wanted to know more about. I had heard the buzz over Loki, and I can certainly see his appeal. The guy is pretty funny and charming:

“I would simply take you in my arms and hold you there until you swooned.”


And he’s probably the only person who would ever have the guts to say this to the frightening, icy Queen Elora:

Elora: “You think you can use your charm to get out of anything,
but I don’t find you charming at all.”

Loki: “That’s a shame. Because, with all due respect, Your Highness, I could rock your world.”


I remain firmly on Team Finn, though this “I can’t love you, because I care about you” stuff is getting O.L.D. Man up, Finn. We need you!

“Right then, it didn't matter what his reasons were.
All I knew is that I was sick of him breaking my heart.”


I actually liked Wendy a lot better in Torn. I hope it is because she grew as a character and not just because I became immune to her whining. I do feel for her and the position she finds herself in. I can’t imagine what it would be like to find out the shocking truth of a life you never knew existed.


I adore Tove, and the plot twist involving him was awesome. I love the message in his storyline, and I’m rooting for Tove to have his happily-ever-after.

“Tove had blown the doors open with his abilities, and he stood on the other side of them, looking astonishingly bad ass.”

There’s a lot more I could say about Torn, Amanda Hocking’s incredible writing, the fascinating world she has created, and these easy to fall for characters.... but Ascend awaits, and I simply can’t stand the suspense any longer!