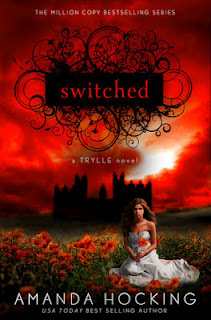 When Wendy Everly was six years old, her mother was convinced she was a monster and tried to kill her. Eleven years later, Wendy discovers her mother might have been right. She’s not the person she’s always believed herself to be, and her whole life begins to unravel—all because of Finn Holmes.

Finn is a mysterious guy who always seems to be watching her. Every encounter leaves her deeply shaken…though it has more to do with her fierce attraction to him than she’d ever admit. But it isn’t long before he reveals the truth: Wendy is a changeling who was switched at birth—and he’s come to take her home.

Now Wendy’s about to journey to a magical world she never knew existed, one that’s both beautiful and frightening. And where she must leave her old life behind to discover who she’s meant to become…

Wendy spent her entire life knowing she was different. Feeling as if she didn’t belong. Her mother attempted to kill her on her 6th birthday and never believed Wendy was her real daughter, or even a real human, for that matter. Now, Finn Holmes, a gorgeous, yet creepy, guy from school, won’t stop staring at her. Turns out, he’s not a creepy stalker... he’s a Tracker, and his job is to bring Wendy home - to her real home, her birthright.  She’s going to find out the truth about who or what she is. A truth that the woman who raised her... might actually have been telling all along.

I love the beautiful red cover, and, while it has a girl in a dress (I promise I won’t go on another rant here), THIS dress is actually significant in the story. While I am a huge fan of Amanda Hocking and her Hollows series, I had some trouble getting into Switched. I'm blaming it on the fact that Switched was my first foray into audio books. Sadly, it may also be my last. Results: Not favorable. The narrator made Wendy sound like a whiny, spoiled brat, and Finn came across as a mean, controlling DB. I didn’t want the audio/narrator to ruin the story or the characters for me, and, fortunately, I had a physical copy of Switched, so I was able to continue the story the good old-fashioned, nature-intended way.

Things got much better once I was able to lend my own voice to these characters. Turns out, Wendy... well, Wendy really is whiny and spoiled, but Finn, on the other hand... Finn was just, well...he made me...

“‘The desperation was coming off you in waves. You were all but begging to dance with me. I am doing you a favor.’”

So, you can imagine how he makes me melt into a gooey puddle when he says things like this:

“He kissed me desperately, like a drowning man and I was his oxygen.”

As if that were not enough... he can play the piano. Be. still. my. heart.


Finn’s job is to keep Wendy safe - NOT to get involved with her romantically. Being a tracker makes Finn much lower on the Trylle social ladder than Wendy, whose position is quite high.


“Gently he placed his hand on my cheek, letting his fingers press warmly on my skin, and I stared hopefully at him. ‘I am not worth it, Wendy,’ Finn whispered hoarsely.”

Ahhh, the forbidden love. My FAVORITE.


A relationship between the two of them would be more than frowned upon.... it’s grounds for banishment. And given her new domineering, wicked mother figure, banishment would probably be the least of their worries. Seriously, the girl has the most horrible luck in the mommy department. Throw in a group of renegades known as The Vittra, who are hell bent on abducting her, and you’ll know why all the recently acquired riches in the world don’t make Wendy’s new life any easier than the one she was forced to leave behind.


The ending of this book has me eagerly starting the next two novels in this series. I can’t wait to see how Wendy’s character grows (fingers crossed) and what she faces, due to some of the decisions she made. Most importantly, I can’t wait to read more about the swoon-worthy Finn.


“When something is important to you, you make sure it’s safe.”