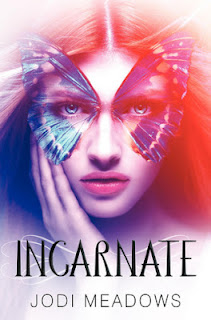 Ana is new. For thousands of years in Range, a million souls have been reincarnated over and over, keeping their memories and experiences from previous lifetimes. When Ana was born, another soul vanished, and no one knows why.

Even Ana's own mother thinks she's a nosoul, an omen of worse things to come, and has kept her away from society. To escape her seclusion and learn whether she'll be reincarnated, Ana travels to the city of Heart, but its citizens are afraid of what her presence means. When dragons and sylph attack the city, is Ana to blame?

Sam believes Ana's new soul is good and worthwhile. When he stands up for her, their relationship blooms. But can he love someone who may live only once, and will Ana's enemies--human and creature alike--let them be together? Ana needs to uncover the mistake that gave her someone else's life, but will her quest threaten the peace of Heart and destroy the promise of reincarnation for all?

I loved every aspect of this book, from the gorgeous cover and the fascinating details of reincarnation, to the amazing characters and all the descriptions that fill these beautiful pages. This was a very unique book for me, and I was easily lost to the story that Jodi Meadows told.

In the Range, souls have been reincarnated for thousands of years... at least, that’s the way things were until Ana was born. Ana is not a reincarnated soul, and no one knows what happened to the soul that vanished. Most of the Society blame Ana for the loss of their friend, but no one detests Ana more than her own mother.

Ana’s mother only took care of her because the Council forced her to. Not exactly mother of the year material, to say the least. Ana’s upbringing was heart-breaking, but I love that it didn’t break Ana - it only made her stronger and more determined.

“I’m not going to waste time being angry about things I can’t control. If I only have one life, I should make the most of it.”

Then, there is Sam. I love Sam, and it took me by surprise that I fell for him the way I did. I admit it, I like a bad boy in my books. You know the kind... tough, sarcastic, tattooed, dressed in head-to-toe black with a droll sense of humor. Well, that’s not Sam. Sam is... beautiful. The sweetest, kindest, most patient man. He’s not without his humor, though, and he and Ana were awkwardly funny at times. One of the things I loved the most about Sam was that he never referred to Ana as a ‘no soul.’ He called her a ‘new soul.’

“There's always the option of deciding for yourself who you are and what you'll become.”

My favorite part of this entire book was the music. I am a music lover. I sing and I play the piano, so you can imagine how thrilled I was with the parts of the book that focused around a piano. Composing, piano lessons, and just Ana’s awe of the music and the instrument from which it flows have made this book dear to my heart. When Ana sat in front of a piano for the first time, her excitement was palpable. Her love for music was this tangible thing that brought not only her, but myself as the reader, to a state of pure bliss. I don’t think I’ve ever related more to a character than I did with Ana.

“Music overwhelmed me, soaked into my skin like water. I didn’t have words for the squiggles and dashes across the pages, or the way his fingers stretched across the keys to make my heart race. If I could hear only one thing for the rest of my life, this was what I wanted.”

If you’re not a big piano/music fan, don’t worry - it doesn’t take up huge portions of the story. There is romance, action, adventure, and... dragons. That’s right, people - dragons! Incarnate has a little something for everyone.

Jodi Meadows has made a fan out of me, and I can hardly wait for her next book!