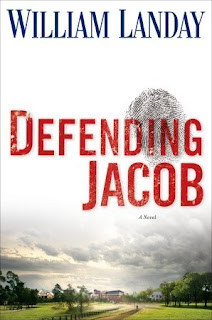 From Goodreads:
Andy Barber has been an assistant district attorney in his suburban Massachusetts county for more than twenty years. He is respected in his community, tenacious in the courtroom, and happy at home with his wife, Laurie, and son, Jacob. But when a shocking crime shatters their New England town, Andy is blindsided by what happens next: His fourteen-year-old son is charged with the murder of a fellow student. Every parental instinct Andy has rallies to protect his boy. Jacob insists that he is innocent, and Andy believes him. Andy must. He’s his father. But as damning facts and shocking revelations surface, as a marriage threatens to crumble and the trial intensifies, as the crisis reveals how little a father knows about his son, Andy will face a trial of his own—between loyalty and justice, between truth and allegation, between a past he’s tried to bury and a future he cannot conceive. Award-winning author William Landay has written the consummate novel of an embattled family in crisis—a suspenseful, character-driven mystery that is also a spellbinding tale of guilt, betrayal, and the terrifying speed at which our lives can spin out of control.

I’m not a huge fan of courtroom dramas. I bore very easily with too much legal jargon and lawyer persona. So, the fact that I thoroughly enjoyed Defending Jacob and experienced such an internal battle over what I was reading is a testament to William Landay’s brilliant writing and his very compelling story.

The story is from a father’s POV - a father whose son has been accused of an unspeakable crime. A father who just so happens to be the assistant district attorney handling the case and who provides the reader with first hand knowledge of what such an accusation does to a family - not to mention the toll it can take on marriage, career, and even friendships. I wrestled back and forth with the question of, “Did Jacob do it, or didn’t he do it?” I came to my conclusion early on, so one would think I might lose interest in the book... but not even close. There was quite a surprising twist in the story that literally left me with my mouth hanging wide open. I love a book that can do that!

How many times have we been guilty of watching a case play out on TV where a child has been accused of a crime, and a small (or not-so-small) part of us can’t help but wonder where the parents went wrong? How did they raise a child to where they would find themselves in such a predicament? This book really demonstrates how incorrect such assumptions can be. It describes an instance in which the parents did nothing wrong; they were good and loving parents who raised their son in what society would deem the correct way, yet they find themselves being ostracized in their community. Jacob, a handsome, smart, and good boy, finds himself a social pariah. I couldn’t help but feel compassion for him and his family.

Never have I given more thought to the Biblical saying, “The sins of the father are visited on the children,” than I did while reading this book. But to say more would reveal too much, thus robbing the reader of the book’s shock value. I will just say that this was a great read and a thought-provoking story, and I would highly recommend it to anyone interested in legal thrillers (and even to those who don’t normally enjoy this particular genre). I haven’t been able to stop thinking about this book since I put it down. I’ll definitely be interested in reading more by William Landay.

An ARC of this book was provided by Netgalley for review.
Posted by A Belle’s Tales at 7:32 PM
Email ThisBlogThis!Share to TwitterShare to FacebookShare to Pinterest
Labels: ARCs, Book Reviews