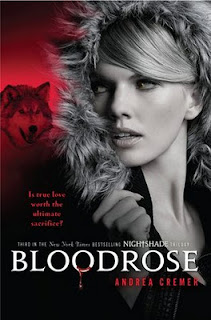 The Ultimate Sacrifice.
Calla has always welcomed war. But now that the final battle is upon her, there’s more at stake than fighting. There’s saving Ren, even if it incurs Shay’s wrath. There’s keeping Ansel safe, even if he’s been branded a traitor. There’s proving herself as the pack’s alpha, facing unnamable horrors, and ridding the world of the Keepers’ magic once and for all. And then there’s deciding what to do when the war ends. If Calla makes it out alive, that is.

In the final installment of the Nightshade trilogy, New York Times bestselling author Andrea Cremer creates a novel with twists and turns that will keep you on the edge of your seat until its final pages. A dynamic end to this breathtaking trilogy.


I mentioned in my review of Wolfsbane that if Nightshade was our introduction to the characters, then Wolfsbane was our guide to the history of those characters. For me, Bloodrose was a combination of both, but with more heart and more non-stop action than I could have ever imagined. It is a beautiful ending to a phenomenal story.

I have truly enjoyed the journey this series has taken me on and the characters I can’t stop thinking about.


“Our kisses were so full of need, so long, so fierce that I could hardly gasp for breath.”

The book was very poignant for me, and I read it with a heavy heart, knowing this was the last in the trilogy. I admit there were a lot of tears shed when I realized where the author was taking the story, but I wouldn’t want her to change a single word. Even through the sadness, she still had me laughing with her character’s lines:

“I growled and then I slapped him.

‘Hey!’ His hand pressed to his cheek.

‘You always say that when I slap you,’ I said.

‘I think it’s a problem that you know what I say when you slap me,’ he said.”

And Connor is a definite favorite:


“‘Oh gods! My eyes!’ Connor covered his face. ‘My innocence!’
‘Shut up, Connor,’ I said, both relieved and disappointed by the interruption.”


As sad as I am to see the ending of one of my favorite trilogies, I applaud Andrea Cremer for ending it with such a bang. I know it is a series that won’t sit on my bookshelf, gathering dust. I intend to revisit it and lose myself in the world she created quite often. Thank you for the ride!

And now a slight rant:

I am disheartened at some of the reviews I have seen for this book.  The low ratings being given because Calla didn’t choose the boy the reader wanted her to is nothing short of ridiculous. You don’t rate a book based on whether your “team” wins or not. You rate it on the fact that the author evoked such strong feelings in you about her characters that you cared enough to choose a team in the first place. If you wanted to cry (I did), hug the book (I admit it), or throw it against a wall (it was more like a gentle toss), then the author did her job! That is some serious 5-star writing. I am a wolf girl through and through, but I don’t take it out on Charlaine Harris that Sookie isn’t with Alcide. I didn’t low ball Twilight when whiny-do-nothing Bella ended up with Angstward and my poor little wolfpack was left with a string of unanswered questions. I like that these writers stirred enough emotion in me and got a big enough rise out of me to make me feel that way. Just like Andrea Cremer did. Oh, and one more thing: I am and will always be Team Ren.